skip to main | skip to sidebar

As we start to come up on our one year anniversary, we are thrilled to share the exciting news that we will be opening a new location in Emeryville. Officially called Farley's on 65th, this new location will help us serve all our friends in the town next store. We did not want them to miss out on all the fun!

Farley's on 65th will open Tuesday, May 11. We are going to ease into this so initial hours will be Mon-Fri from 7:30-2:30. Look for hours and days to expand in the near future.

Most importantly, the official grand opening party will happen in late May and you are all invited. Stay tuned for details.

Panini Special of the Week

The special for the week of January 18 is Turkey, brie and caramelized balsamic onions. The onions are so good you could eat them as a side salad!
Posted by Chris at 1:01 PM 1 comment:

Well, 2009 was certainly a BIG year for us at Farley's East! The year began with the construction plans being approved by the Alameda County Health Department and then a surprisingly quick approval by the City of Oakland. From there, we were underway with construction, working fast and furious to open ASAP.

Speed forward to Thursday, June 18, 2009 at 11am and you have Farley's East open for business! Looking back, we have learned so much, grown so much and look forward to continued growth and learning in 2010.

I have to say that we have been overwhelmed with the support we have received from the neighborhood. The countless "thank you's" for just being open has been tremendous. Prior to opening, when we told people we would be open on the weekends, they said we were crazy. Six months later, we have a bustling weekend business all day long. The neighborhood has made this happen and for that, we are extremely grateful. 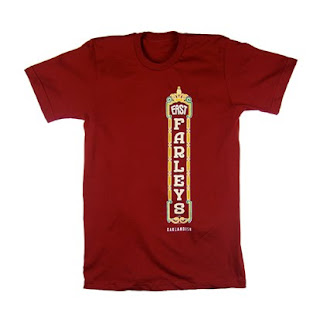 Farley's East is proud to announce that we have collaborated with Oaklandish to make an Uptown inspired shirt that goes directly to a great cause, the 2010 Oakland Innovator Awards. Printed by hand on an American Apparel "cranberry" colored shirt. Available in a v-neck as well and only at Farley's East. Supplies are super limited to make sure you get there soon.
Posted by Chris at 4:29 PM No comments:

Non-Profit of the Month Happy Hour

Every month, we feature a local non-profit that is working to better the lives of Oakland residents in some way. As part of the program, we host a happy hour providing free appetizers and a portion of all sales are donated to the non-profit. This month, we have an exciting and unique organization. We are partnering with Oaklandish. Oaklandish funds the Innovators Awards which recognizes multiple local non-profits:

"Oakland has historically been a hotbed of renegade activity, where boundaries are redefined and trends are created rather than followed. To help encourage the continuation of this "trailblazers' legacy," Oaklandish has created the Oaklandish Innovators Award, a fund that offers annual grants to those organizations and individuals who are doing pioneering work in our community."

We are proud to raise funds for the 2010 Oaklandish Innovators Award. We hope you join us on Thursday, December 3 from 5-8pm to support this worthy cause.
Posted by Chris at 9:42 PM No comments:

We now have the Farley's Coffee Card providing multipurpose fun! Buy 10 drinks, get one free. Prepay so you don't have to carry around that annoying change or your credit card. Give a gift card to your friend. Just pick up a card at the register.

These cards should make life simpler for you and us. We hope you like them.
Posted by Chris at 7:56 AM No comments: 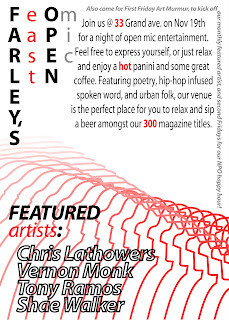 For twenty-years, Farley’s has built a strong community and a faithful customer base in San Francisco. In June of 2009, Farley's East will be opening in Oakland. We chose a space in Uptown (Grand/Broadway) to provide that rapidly changing area a location for people to gather to work, eat/drink and enjoy good company. It is our hope that you will ultimately join us for the atmosphere and community, not just the great coffee.